This is a short first-person shooter similar to The Catacomb Abyss and very loosely inspired by ancient Egyptian myth.  Developed for the I Can't Draw jam, June 2020.  I had to keep it simple due to the short time frame, but I'm fairly happy with how it turned out.

For the best experience, try the downloadable version.

The depraved sorcerer Khafenkamet has lain entombed for centuries, but his angry spirit has found its way back to his body, and he now seeks to flee from his crypt.  As Nephthys, goddess of death and guardian of the afterworld, you must enter the pyramid where Khafenkamet is buried, defeat his corrupted guardians, and return him to the grave before he escapes and wreaks havoc on the outside world.

Default Controls (can be rebound in downloadable version)

Note: mouse sensitivity may be a little high in the web version.

There are three levels in the pyramid ending at Khafenkamet's chamber.  Find the stairs down on each level, then destroy Khafenkamet.

You will be weak when you first take physical form in the pyramid.  Consume the vital energy stored in canopic jars to restore your health.

Your standard shot has unlimited ammo.  Collect enchanted gems to power your super shot.  The super shot fires more quickly, does double damage, and cuts through enemies.  Use it sparingly.

Ankhs will open locked doors.  Crumbled walls can be destroyed with a shot, but beware of what may be waiting behind them.

I love ancient Egypt, and you did a solid job of mixing in those elements with your dungeon crawler. I really enjoyed the fps style. Great work!

This was one of the most epic games of this jam! It blew me away, while nostalgically nailing that retro style. I appreciated every second of this and will probably have nightmares about the Ancient Hall of Honor. You did an outstanding job! You inspire me 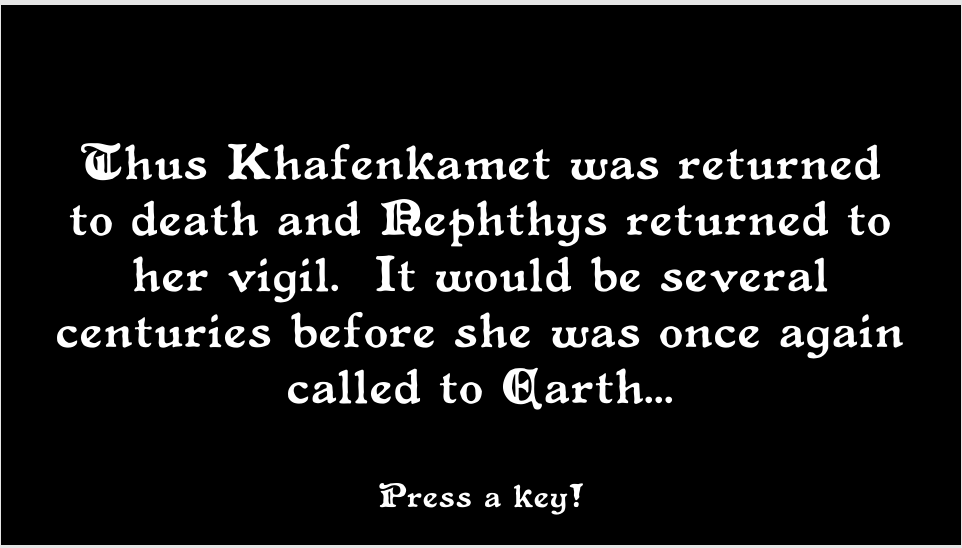 Just keeps spinning right. I can counter it if I move the mouse left but it neutrals spinning right. Looks like a cool design though! I have a corsair m65 mouse if that makes any difference.

Which version are you playing?  Does it happen the same every time you start the game?

Also, if you have a gamepad plugged in, have you tried unplugging it?  It could be picking up the right stick.

I am using the windows version. It happens every time. I also just unplugged my controller thinking that may have been it, but same result. I did make it to a mummy that punched me to death, though.

edit: ok I forgot I have ANOTHER controller plugged in. That was the problem!

Glad it's fixed!  I might need to adjust the analog sensitivity on the gamepad.  I'll look into it.

I always love retro styled fps games! Did find a bit annoying that you don't start with full health and that there's no audio or visual indication that you're taking damage. I find it funny that it looks like the main character is wearing a sweater to me :D.

Thanks for playing and commenting!

There is actually a red border that flashes on hit (you can see this in one of the screenshots) and a brief sound effect, but they may be too subtle.  It might be good to make these more obvious.

The yellow thing is supposed to be a bracelet or bangle, but it didn't turn out too well since you don't see much of the arm.

If you show a little bit of skin after the bracelet, it'll look like one 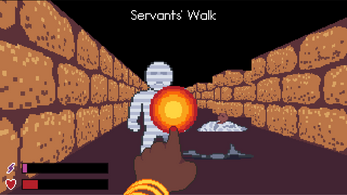 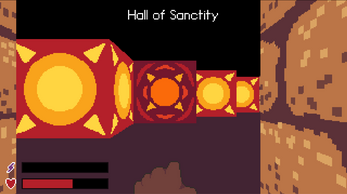 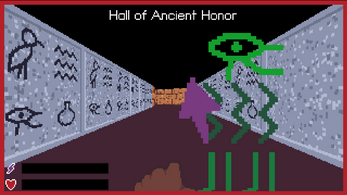